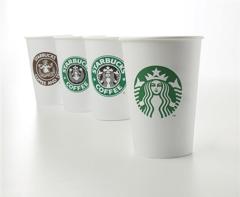 Starbucks, the world’s largest coffee company, has released a new logo for their company, products, and packaging. The iconic sea nymph is now by itself, no longer surrounded by words. The new look is the product of a new direction for the company as it is on its journey back from its toughest times in its 40-year history. The loss of words is due to the fact that the company feels it no longer has a need to reinforce its name at every turn. Starbucks is also branching their business operations beyond coffee. The new logo is planned to reach stores in March to correspond with its 40th anniversary.

This new logo is the fourth version since the beginning of Starbucks in 1971. Since the Starbucks brand is expanding, the logo needs to evolve. It is operating in such a way that being associated to just coffee is becoming too confined and restrictive. Starbucks is not only selling coffee, but an overall experience. The new logo allows for Starbucks to continue selling an experience as well as broaden their business operations.