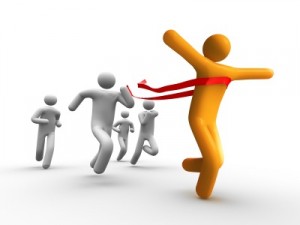 We all know the famous rivalries in business such as Coke vs. Pepsi, Microsoft vs. Apple, and Ford vs. General Motors. Although we have these business rivalries, do we know why they start. Competition is one of the ingredients in how business is shaped. It is a natural occurrence based on two separate parties vying for the same goal. Businesses try to win acceptance from consumers, which is where rivalry and competition essentially begins.

Consider Coke vs. Pepsi, one of the oldest rivalries in American business. Also known as the Cola Wars, Coke and Pepsi started competing with each other in the 189os. Coke dominated the market, but Pepsi was always close behind. The brilliance behind the Cola Wars was that they both had different ideas of how to attract consumers and control the market. They both implemented innovative marketing campaigns throughout the years to gain even a fraction of the market. They also modified pricing and brand strategies to get a little closer to victory. It has been over 100 years now that this rivalry has existed and it still continues today.

Competition and rivalry is a healthy part of how businesses operate. Competitors help each other learn and move forward. Do you think Coke and Pepsi would be where they are today if they didn’t have an intense rivalry? Coke and Pepsi are successful because they were able to improve themselves individually based on what they learned from each other. Competition also helps the marketing process. Consumer needs and wants are uncovered during rivalry, which allows creative marketing tactics to be used. Now that social media has entered our lives and has grown into a big phenomenon with outlets such as Facebook and Twitter, marketing can be taken to a whole new level, opening doors that we never knew existed.

Although competition and rivalry don’t have reputations as being based around something good, in reality they have shaped the way we do business. It can’t be all that bad if Coke and Pepsi have survived over 100 years of rivalry and both are still going strong.