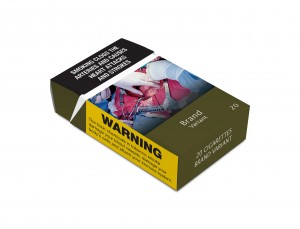 The British Heart Group is strongly urging the British government to ban all those eye-catching designs and branding on cigarette packages in an effort to stop young people from being lured into smoking. This is a great step towards creating a healthier generation, but if this ban goes into affect, tobacco industries in Britain could be hit hard and see sales drop.

Most of us know that there is a link between smoking and lung cancer, but what exactly is making people reach for the shelves to get their hands on these products? The British Heart Foundation recently released a survey that found that more than a quarter of young people make assumptions about the relative harm induced by cigarettes just from the packaging alone.

“Tobacco advertising is banned in the UK, but campaigners say the fact that tobacco companies can still use their packs to promote their brand is “an absurd loophole” in the law” (Reuters).

“The BHF is calling for the introduction of plain packaging which has no eye-catching colors or brands but is mostly covered with graphic warnings about the health dangers of smoking. An example of the sort of packs they would like to see is here: bit.ly/sqTlRg” (Reuters).

The survey collected responses from more than 2,700 16 to 25 year-old smokers and non-smokers and found that three quarters for those who replied thought that selling cigarettes that were in packages that were less eye-catching, had no colorful brands or logs, and had larger health warnings, would make it easier to for people to smoke less, quit, or not even start smoking. The survey also found that one in six said they would consider the pack design when deciding which cigarettes to buy; 12 percent said they would choose a brand because it was considered “cool”.