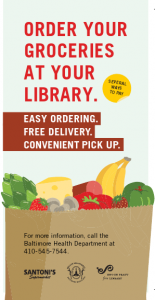 The question is not if libraries will exist throughout the digital age, it’s how will they re-invent themselves.

Libraries cannot survive as community-funded hubs for thousands of books that are never checked out by its patrons. Moreover, expensive reference materials that libraries invest tons of dollars on are now free online and conveniently available for anyone to peruse. Many libraries claim that their number one thing that they deliver to its customers are free DVD rentals…not a good long-term strategy to build upon.

Now that people are going online for the same information provided by their local libraries, it’s time to shake things up. There are a few examples of libraries that are creatively positioning themselves into the digital age as an attempt to salvage their sense of community.

Lets look at the City of Baltimore. The Health Department has recently launched the Virtual Supermarket Project. They chose two neighborhoods in East Baltimore and Washington Village that they dubbed as “Food deserts”, or areas without access to healthy food options. Teaming up the Enoch Pratt Free Library (with branches in both neighborhoods) and Santoni’s Super Market, they now have given local residents easy access to healthier food options at a fair price.

Residents simply go into the library and order their groceries online using the libraries computers. They will receive a printout of their order and pay at the time of ordering. Then they come back the next day to pick up their order with the Baltimore City Health Department subsidizing the delivery charge.

This system benefits the consumer because a wider selection of high quality fruits, vegetables, grains, and dairy is made available in the neighborhood than is offered by local corner stores. Pooling purchases for delivery at one convenient site allows consumers to avoid the delivery fee and the requirement that a certain amount of money be spent for the order to be delivered. Also, consumers do not have to navigate public transportation to get to the grocery store, nor will they have to manage hectic schedules and childcare to dedicate time to grocery shopping. From the mayor himself:

“This program will make these neighborhoods stronger and healthier, allowing residents the same access to full-service, competitively priced grocery stores that much of the rest of the city enjoys,” -Mayor Stephanie Rawlings-Blake.

Other examples of libraries who are shaking things up:

The Public Library of Charlotte and Mecklenburg County, in North Carolina, has a multimedia space where kids shoot videos and record music. It also runs a blog dedicated to gaming and hosts video game tournaments regualarily.

The library features an “info column,” where people share digital news stories; an “info galleria” where patrons explore digital maps layered with factoids; a digital floor that lets people immerse themselves in information; and RFID-tagged book phones that kids point at specific books to hear a story.