In the packaging industry it is well known that it is essential for a brands product to have packaging that has an eye-catching design and is enticing to the consumer. This may include unique print options such as foil stamping and embossing, or it may mean having fun patterns with bright, bold colors. Whatever the case, an article written by Columbia student, Carol Tang, focuses on a lost consumer in the packaging industry, the colorblind, and how they are affected by packaging choices. Check out the complete article below! 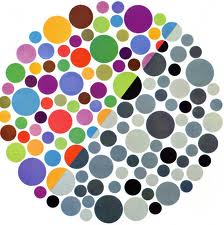 Businesses spend millions of dollars to design and package their products in flamboyant colors to entice consumers to buy their products. But these tactics are lost on a sizable segment of our population: people who are colorblind.

“Blue and red are the worst colors for me to have together,” said Jeff Revell, a photographer in Washington, D.C. “Yet they’re everywhere. It looks like the blue vibrates inside the red. It gives me a headache.”

Revell is red-green colorblind; color distinctions are hard for him. Shades that are blended with red or green, such as purple and brown, all look the same.

About one in 12 men and one in 200 women in the United States are red-green colorblind like Revell, according to the National Institutes of Health. Many products on the market, from food to personal care, are not appropriately packaged for people who are colorblind, neglecting more than 250 million people worldwide, according to colorblind awareness groups. Getting businesses to start considering packaging designs that include, or exclude, certain colors will be a slow process, the groups said.

“Colorblind people don’t make a fuss, because they don’t realize what they can’t see,” said Kathryn Albany-Ward, founder of Colour Blind Awareness, a nonprofit group based in Britain. “If they knew what they were missing, they would.”

Colorblind people can see colors, but fewer of them. Albany-Ward’s 7-year-old son is red-green colorblind. She is trying to get businesses to understand how difficult certain color combinations can be.

“I’ve been in touch with a lot of toy manufacturers, and they don’t even take color blindness into account,” she said, adding that many businesses are reluctant to alter packaging because of the costs involved.

In the United States, Carol Kaufman-Scarborough, a marketing professor at Rutgers University, is working toward a similar goal.

“We place so much emphasis on color as an important marketing tool, but we haven’t screened people in terms of their color perception,” said Kaufman-Scarborough, who put together the Color Blind Consumer Survey and published reports about colorblind shoppers.

Simplicity of colors is often better, especially when it comes to labeling, she said –even if that means having to make the packaging look less exciting.

“Black print on white background is the easiest one to be sure that’s always seen,” she said.

Colorblind people lack the ability to see one, two or all three colors of the normal color vision spectrum — blue, red, green — in varying degrees. Rarely is anyone achromatopsic, or able to see only black, white and gray. Red-green colorblindness is most common. Blue-yellow colorblindness affects fewer than one in 10,000 people, according to the National Institutes of Health. This makes blue a better color to use for colorblind consumers.

Gillette, the manufacturer of men’s shaving products owned by Procter & Gamble, is packaged in blue boxes with a white logo.

“The Gillette logo is both bold and high contrast, so this could help with legibility for people who are colorblind,” said Mike Norton, a Procter & Gamble spokesman.

But most American companies show little colorblind consciousness. For example, Richard Buino, a spokesman at Kraft Foods, wasn’t aware if his company had a marketing plan for colorblindness.

Corporate blindness to colorblindness is seen on the manufacturing side, too. Jessica Kimbrough, an executive for the giant consumer packaging company Rock Tenn, works with many large businesses.

“We have not had any inquiries from our customers who use paperboard packaging for colors based on colorblindness,” she said.

What makes designing for colorblind people even more difficult is the wide variances among them. In seventh-grade science class, Mike Lemons was handed a paper with a circle of dots and numbers in the middle and was surprised that everyone could see numbers that he could not.

Lemons, now a restaurant manager, has since become more comfortable with his colorblindness, but he said he still thinks people and businesses misunderstand the colorblind. Even two red-green colorblind people will see the world differently.

“What you fix for one person’s colorblindness might actually make it more difficult for another’s,” he said.