Ok, so the world’s gearing up for the World Cup kickoff today. Awesome! All eyes focusing on the host country South Africa who prepared a set of state-of-the-art “green” stadiums to hold the games. Five of the ten total venues showcase sustainability designs and features. Take a look at a few: 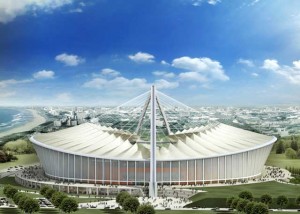 Moses Mabhid Stadium- Located in the sea side city of Durban. The architects took great care to lower the structure’s energy profile by using natural cooling techniques, great protected daylighting , and rainwater catchment. This 70,000 seat facility was designed with the future in mind for ongoing sporting events, concerts and as a seed for a future Olympics bid. 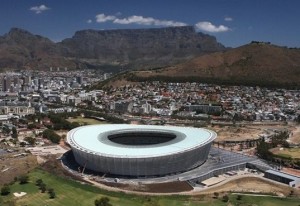 Green Point Stadium– The skin is a translucent silvery-white membrane that takes on the color of its surroundings while producing a soft glow at night. A truss and cable system supports a semitransparent roof that lets light in but limits solar heat. The stadium has capacity for 68,000 fans, and its design was specifically developed to reduce the venue’s overall profile.

Soccer City Complex– Located in Johannesburg. Home to the World Cup 2010 finals, this world-class facility is actually an extraordinary remodel. The renovated venue is based on the iconic African pot known as the calabash. The stadium achieves a transformative effect on the landscape through its form, color, and light. At day its earthen patterned color evokes the copper-rich land which has supported the local economy for generations. A night transparent panels in the façade create a unique and memorizing pattern. The façade’s transparent roof streams daylight into the concourse. Capacity 90,000.

The tournament opener will feature a match between South Africa and Mexico. Let the games begin!