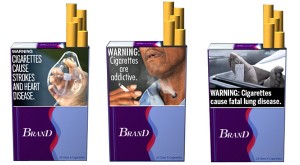 Graphic cigarette packaging has been all over the news in recent months mainly coming out of Australia. But while Australia still waits for senate approval to pass a law requiring graphic packaging for cigarettes, Canada has beat them to the punch.

Sixteen separate graphic warnings, such as a cancer-infected mouth or an emaciated cancer-stricken women, will cover 75 per cent of the front and back of Canada’s cigarette packaging. Every package will also contain a toll-free number making it easier for smokers to get advice about quitting. The big difference between legislation in Canada and Australia is that Canada will still allow companies to use their long-established trademarks and logos to differentiate brands. Australiais calling for plain cigarette packaging with no brand distinction.

The health industry has praised the move while tobacco companies argue that minimal impact from the graphic packaging will be had because the public has been well aware of the health risks of smoking for years. In Australia, tobacco companies say removal of branding on cigarette packaging breaks international trade obligations.

Canada retailers will have until June of 2012 to comply with the new law. If Australia gets the law passed, all cigarette brands will be sold in olive green packaging with graphic warnings sometime in July of 2012.

We don’t like to get political on our blog too often but it begs the question. Is this legislation going to far? Or is it warranted?