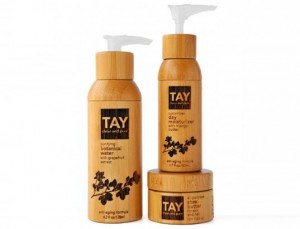 One industry that has been slower to adapt to green packaging has been the cosmetic industry. Many cosmetic companies put the emphasis of elegance first when it comes to packaging. This posts focuses on a company who combines elegance with green packaging.

TAY’s Natural Skincare Products have a great eco-friendly packaging strategy using bamboo! Eight of their affordable skincare products are organically made and packaged in 100% bamboo and recycled PET plastic containers. The bamboo packaging really emphasizes the organic nature of this skincare line and communicates its importance to consumers. Because bamboo is used, the packaging is long-lasting and can be reused over and over again. 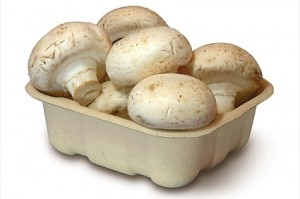 Dell has become a company that is dedicated to finding green alternatives for their packaging. They have announced that they will be using mushrooms as part of their cushioning for their server packaging. The brilliance behind using mushrooms is they are grown, not manufactured. This allows less energy to be used to produce the packaging. Mushrooms are also more dense, meaning they can support the weight of Dell’s servers and they can be grown quickly. The end result is an eco-friendly alternative for packaging that consumers can compost. Dell has already experimented with bamboo packaging in 2009 and will combine it with the new mushroom based packaging.

The process of conducting such a sustainable creation for packaging is very interesting. It is a fairly short process, lasting between 5 and 10 days. It starts out using agricultural waste products, mainly cotton. The cotton hulls are placed in mold and then implanted with mushroom spawn. It then develops into a root structure of a mushroom. They have tested and retested this new development in sustainable packaging and will pilot run it with its PowerEdge 710 server. If this test is proven to be a success, they will expand the mushroom packaging to their other servers.

Dell has many goals in becoming a more sustainable company. They plan to eliminate 20 million pounds of packaging material by 2012 and make sure packaging is recyclable. They have made an extraordinary accomplishment by finding a green alternative for their packaging. Dell also keeps working hard everyday, looking for other ways to reduce their carbon footprint and be a more environmentally friendly company.

Dell’s focus on sustainability has established the electronics giant as a leader in the green movement. Back in December of 2008, Dell announced a plan to transform computer packaging by adding recycled content (32%). By 2012, Dell hopes to achieve its goal of increasing the recycled content in its packaging by 40%. To do this, the company is implementing a strategy based on three C’s: Cube, Content, and Curbside.

Cube
Reducing the size of product packaging so it is more efficient, from the size of the boxes that hold product components to the number of items that can be moved per shipping pallet. In one example, Dell optimized the packaging for its Inspiron laptop so that the number of computers per pallet increased from 54 to 63.

Content
As previously stated, Dell is ramping up the amount of recycled contents that go into their packaging. For heavier products that require sturdier support, the company has increased the use of recycled foam versus using virgin product. Dell has also increased the use of post-consumer recycled plastics, integrating the equivalent of more than 9.5 million half-gallon milk jugs into its packaging.

Also, Dell has been using bamboo as a strong and compostable alternative to the molded paper pulp, foams, and corrugated cardboard often used in packaging.

Curbside
Ensuring that their packaging is curbside recyclable is that last piece of Dell’s green packaging strategy. Dell increasingly chooses materials that can be tossed in the recycling bin such as post-consumer plastics and molded paper pulp.

Bamboo is still not accepted by many municipal recyclers for curbside pickup however, Dell is working with Georgia Pacific, Unisource Global Services, and Environmental Packaging International in an effort to certify its bamboo packaging for recycling. 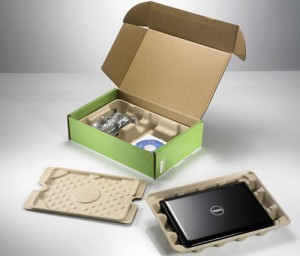