You might not know this, but there’s a category for the Grammy Awards that doesn’t get aired during the live telecast. Probably because the title is so long-winded, it would get cut short by the play-off music. The category is Best Boxed or Special Limited Edition Package and, since its inception in 1995, it’s usually presented at a ceremony preceding the awards show. And usually it’s given for some specialty artwork or cool inclusive. But this year’s BBSLEP–woof–Grammy Award-winning packaging was really a showstopper.

The award was given to a trio consisting of Susan Archie, Dean Blackwood, and–no big deal–Jack White! That’s right, the talented musician, famous for bands like the Dead Weather and the White Stripes, has now picked up his 11th Grammy–but this time it’s for packaging! (Actually, his 10th was too, but we’ll get to that in a minute.) 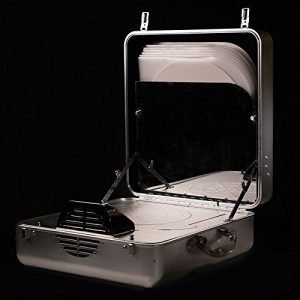 White’s Third Man Records put out a monster collection titled The Rise & Fall Of Paramount Records, Volume Two (1928-32), featuring prolific hits from the early 20th century. To truly showcase this collection, White and his team opted for the luxury packaging route. The cool contents notwithstanding, the packaging is a stainless steel and polished aluminum case designed to evoke the art deco era of early radio. (Check out the video above!)

The packaging isn’t the most practical (the website claims that each case is handmade and it could take up to a month to ship) but with a $400 price tag, the final product better be a little better than a cardboard box.

You don’t have to package your product in a metal suitcase, but you have to respect the idea behind it. The flash, the majesty, the shelf presence of presentation packaging draws a crowd. And, in some cases, draws a famous award too.

Oh, by the way, last year’s Grammy in this category? Also went to Jack White for The Rise & Fall Of Paramount Records, Volume One. Check out that award-winning packaging, plus all the other winners here.