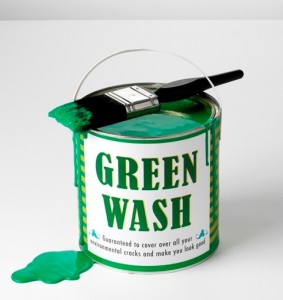 A new study that was recently released by TerraChoice states that 95% of consumer products claiming to be eco-friendly are committing at least one sin of greenwashing. The report highlighted the 7 sins of greenwashing– described as the act of misleading consumers about the environmental practices of a company or the environmental benefits of a product or service. The sin of “No proof” was the most persistent of all greenwashing sins in 2010.

TerraChoice examined 5,296 products for the study while visiting 19 retail stores in Canada and 15 in the US.

The news is not all bad though. Considering that 98% of consumer products were guilty of greenwashing in 2009, the number has decreased in 2010. Further, the number of green products on the market was up 73% this year from 2009.

It’s going to be very interesting to keep an eye on this study. With government regulations and consumers being more privy to the ‘green scene’, one would assume that the percentage will continue to decrease into the future!