On January 18th, many Wikipedia and thousands of other internet websites blacked out their pages in efforts to protest SOPA and the censorship the bill entails. 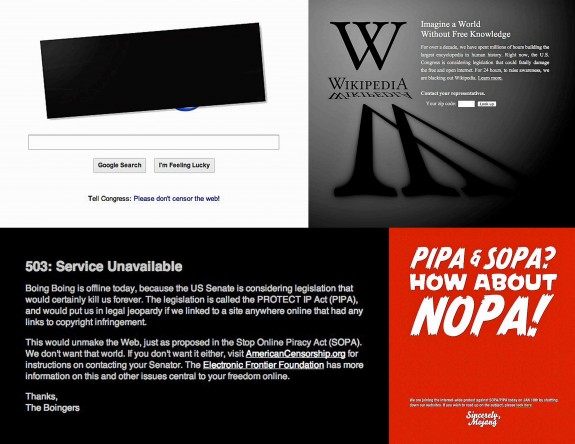 SOPA was first introduced by House Judiciary Committee Chair and Texas Republican Lamar Smith, along with 12 co-sponsors on October 26th of last year. Since then the Stop Online Piracy Act (SOPA) has gained momentum in the form of public protest. Some of the internet’s most influential websites and browsers (Twitter, Google, Reddit, Kickstarter, Tumblr, Mozilla, Yahoo, AOL, eBay, Zynga, Facebook and more…) are going dark in protest of the anti-piracy bill.

In short, SOPA is an anti-piracy bill that has been working its way through Congress, that truly aims to sensor your internet with serious ramifications. The idea behind the bill sounds very reasonable, stop online piracy and the illegal downloading of products without payment or permission. The issue now though is that SOPA and PIPA have become designed to make it possible for companies to block domain names they felt were responsible or encouraged copyright infringement. This would be bad for practically everybody because this does not necessarily prevent privacy and sites can still be accessed through its IP address.

Below is an overview of how SOPA would work, provided by CNet News.

How would SOPA work?
It allows the U.S. attorney general to seek a court order against the targeted offshore Web site that would, in turn, be served on Internet providers in an effort to make the target virtually disappear. It’s kind of an Internet death penalty.

More specifically, section 102 of SOPA says that, after being served with a removal order:

A service provider shall take technically feasible and reasonable measures designed to prevent access by its subscribers located within the United States to the foreign infringing site (or portion thereof) that is subject to the order…Such actions shall be taken as expeditiously as possible, but in any case within five days after being served with a copy of the order, or within such time as the court may order.

Much of the Internet industry and a rather large percentage of internet users are against SOPA. Here is a current list (PDF) of those opponents.  On November 15,  Google, Facebook, Twitter, Zynga, eBay, Mozilla, Yahoo, AOL, and LinkedIn wrote a letter to members of the U.S. Senate and House of Representatives, stating that SOPA poses “a serious risk to our industry’s continued track record of innovation and job creation, as well as to our nation’s cybersecurity.” It is also reported that Yahoo quit the U.S. Chamber of Commerce over the organization’s enthusiastic support for SOPA.

Not only would the potentially infringing website be affected but so would all their sources of funding, which means that any other companies that are doing business with the infringing companies site would have to stop. This could mean that all advertising, links to search engines, or any other listings would be stopped and removed.

Gizmodo does a perfect job in explaining exactly what and how SOPA will affect the internet and you.

“The beating heart of SOPA is the ability of intellectual property owners (read: movie studios and record labels) to effectively pull the plug on foreign sites against whom they have a copyright claim. If Warner Bros., for example, says that a site in Italy is torrenting a copy of The Dark Knight, the studio could demand that Google remove that site from its search results, that PayPal no longer accept payments to or from that site, that ad services pull all ads and finances from it, and—most dangerously—that the site’s ISP prevent people from even going there.”

In all, if passed, SOPA has the ability to affect every facet of your internet viewing and may change the internet world as we know it.

For more information, please read the exact content of both the SOPA and PIPA bills.