Social Media and 3D technology. Both pop culture phenomenon’s of recent years/months that are being embraced by the packaging industry. While there are only a few examples today, you can probably expect to see it continuing into the future.

1. Social Media: It seems obvious in 2010 but not long ago people were wondering if social media was going to be a trend or a mirage. Last year, marketers began budgeting and writing social media applications into their marketing plans on a larger scale. Today, marketing websites and blogs are littered with information about social media and its relevance to business models. To take it a step further, Vitamin Water has put their Facebook logo on the label of their brand new flavor released this month. What’s the name of their new flavor? Connect. There’s also a full paragraph description on the label loaded with references to untagging, friend requests, and photo stalking. It’s black cherry-lime flavored, with caffeine and “eight key nutrients”.

2. 3D technology: 3D is making a comeback. Movies are frequently being released in 3D. Televisions are being made with 3D technology. And now LEGO is jumping into the 3D world by setting up its “Digital Box” on the store shelf (Glasses not required).  When a LEGO set  is held in front of its screen, the German-only (for now) Digital Box will scan the bar code and present an animated model of the completed set on its screen. The project was done by Metaio out of Germany who built this interactive terminal using a software program specifically developed for LEGO. 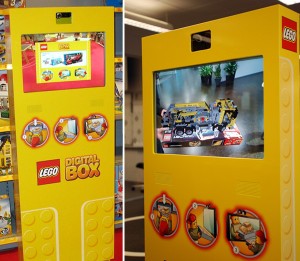