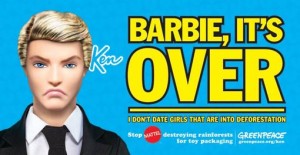 Responding to a campaign by Greenpeace, toy giant Mattel announced Wednesday that it will stop buying paper and packaging from Asia Pulp and Paper. The environmental group has linked Asia Pulp and Paper to rain forest deforestation in Indonesia.

By the end of 2011, 70 percent of Mattel’s paper packaging will be made from recycled material or sustainable fiber. It aims to raise that to 85 percent by the end of 2015.

Mattel’s earlier environmental changes included eliminating plastic-coated wire ties that used to be used to secure Barbie dolls and other goods to their boxes. That effort was spearheaded by Wal-Mart.

Indonesia has one of the fastest rates of forest destruction in the world. Indonesia’s rain forest, the largest in the world after those in the Amazon and the Congo, is home to orangutans, tigers, elephants, clouded leopards and scores of other endangered plants and animals. The Indonesian government estimates that nearly 2.5 million acres of rain forest is being lost every year, according to Greenpeace.