Karla Shafer is the director of Hooper Public Library in Hooper Nebraska: Population 827. She’s also the only employee of the library that’s open 23 hours per week. Showing big heart and determination, Karla has been recognized for her efforts to help immigrants learn English. National grants she has won have financed books and literacy classes at the library. Recently, another grant of $5,000 has been awarded to her so she can continue with the literacy program that she started two years ago.

Her story is inspiring. Being the wife of a retired Methodist minister, Shafer found inspiration by the story of her husband’s grandfather who was a German immigrant who didn’t know English and didn’t get any help until an uncle stepped in to help translate his school lessons. The grandfather then became a Methodist minister which was passed down to his son and then Karla’s husband Ted. 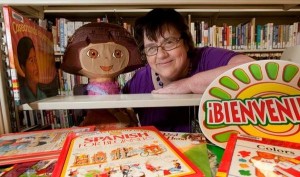 Hooper only has a handful of immigrant families, but Shafer recognized their need for help. The library had no bilingual books and she could empathize with how uncomfortable she suspected those families were feeling- like the German boy- when they walked into the Hooper Public Library.

Shafer, who speaks a little Spanish herself, said the goal of her literacy program was to make sure immigrants did not feel unwelcome at the Hooper Public Library and to help them realize their dream of becoming Americans.

The Hooper Public Library is housed in a former grocery store and also features computers to help with computer literacy, five parakeets, and a variety of Wii video games to make the kids feel at home.

Shafer plans to use some of the recent grant money to expand her literacy program to nearby Nickerson, Nebraska. Some Hispanic families there were unable to get transportation to her first English classes, so she is taking the class to them.

Next month, Shafer is getting an all-expenses-paid trip to Washington DC where she will share her story of how even a “one-girl show” in a small town can make a huge impact to a national gathering of librarians.