Just this morning, Mitsubishi announced that they have a prototype of an in-car Blu-Ray disc player. The player is about 1/3 the size of standard in-home Blu-Ray disc player and is scheduled to launch in late 2009 or early 2010. The player will debut with their car navigation equipment. (no picture is available at this time) Read the full article. 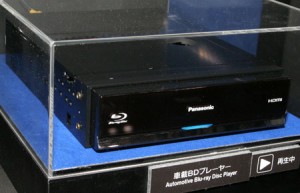 Panasonic has also announced that they also have designed an in-car Blu-Ray player several years ago, but it has never been available for purchase.

Blu-ray aficionados will be glad to eliminate the need for multiple copies of movies in several formats.