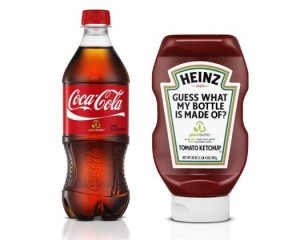 Heinz ketchup is stepping out of their shell and is making a change to their packaging. This will be their first change since 1983 when they began using plastic. The new change Heinz will be making is converting its packaging into the eco-friendly PlantBottle. This new packaging is a recyclable plastic bottle that is made from a combination of petroleum based and plant based materials. This was first introduced by Coca-Cola two years ago and they have announced their partnership with Heinz in hope it will revolutionize the entire food industry. This collaboration between Coco-Cola and Heinz shows how companies can work together and help each other become more eco-friendly.

Heinz Ketchup’s new eco-friendly packaging with be released in the United States this year, with the potential of expanding globally. Over 120 million of the new Heinz ketchup bottles will be released with a label saying “Guess What My Bottle Is Made Of?” They also have goals of reducing greenhouse gas emissions, solid waste, water consumption, and energy usage by at least 20%.