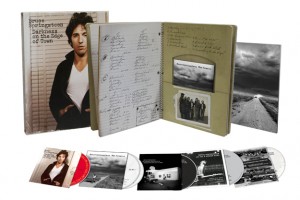 The packaging was designed for a six-disc box set that was titled The Promise: The Darkness on the Edge of Town Story. The six-disc set was created by art directors Dave Bett and Michelle Holme and includes six hours of film, more than two hours of extra audio, four hours of live concert footage from the Thrill Hill Vault, and an 80-page book of images from Springsteen’s notebooks at the time of the album’s recording.

Congratulations  were given to the designers by the Boss himself as he tweeted:

Springsteen was up against others for the Grammy which included: