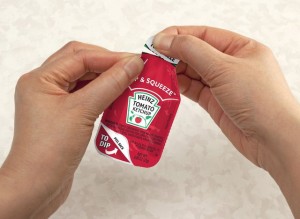 Heinz is at it again. They have found another way to revamp their ketchup packaging, this time on a smaller scale. We all have been in the situation involving those frustrating and hard to open ketchup packets. Well Heinz has developed a solution to that problem by introducing their Dip & Squeeze packaging. Not only can you peel back the label and dip food into the ketchup, it can also be squeezed out easily by tearing off the top. Also there is no need to grab handfuls of packets because one Heinz Dip & Squeeze holds three times as much ketchup as the traditional packet.