Have you noticed a change in Diet Coke’s packaging this month? If you have, or even if you haven’t, be sure to read about what The Heart Truth campaign is and the role Diet Coke is taking to support the cause! 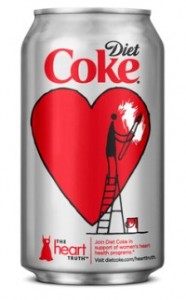 For the fifth year in a row, Diet Coke has teamed up with the National Heart, Lung, and Blood Institute’s (NHLBI)The Heart Truth campaign. Also teaming up for the cause is actress Minka Kelly and iconic fashion designer Diane von Furstenberg. The goal of the campaign is to raise awareness of women’s hearth health educational programs. Five lucky Diet Coke fans will have the opportunity to join these women for the star-studded Red Dress Collection Fashion Show on February 8, which is the big kick-off for New York Fashion Week.

The Coca-Cola Company recently created the newly designed packaging for Diet Coke to commemorate the soft drink manufacturer’s ﬁfth-year of support for the NHLBI’s campaign, to promote heart disease awareness. Aside from the newly designed packaging, Diet Coke has also participated in a variety of awareness-raising programs to build the campaign over the past few months. The special packaging will be featured on Diet Coke throughout the month of February. The design features a stick figure painting a large, red heart. More than six billion packages of Diet Coke will feature The Heart Truth logo throughout the year

Diane von Furstenberg also donated more to the cause by creating a limited-edition collection of Diet Coke aluminum bottles that feature her iconic styles and prints. The bottles will only be sold in select Diane von Furstenberg stores in New York and at her designer website during February. Proceeds from the bottle sales will benefit the Foundation for the National Institutes of Health (FNIH), in support of The Heart Truth and women’s heart health research and educational programs.

The campaign efforts by Diet Coke are taking place both offline and online. Diet Coke will be engaging via social media, through packaging, and on the runway to raise awareness for women’s heart health educational programs. Online, Diet Coke fans will be able to use their social networking abilities to “show their hearts” for the cause and even enter for a chance to win a change to attend the annual Red Dress Collection Fashion Show.  Twitter users hashtagged “#ShowYourHeart,” and people shared photos of themselves wearing red via Twitter, Tumblr and Instagram.

All of the entries were judged, the five best photos were selected, and final judge, Minka Kelly, got to pick one of the five top entries for one grand prize winner. The grand prize winner received a shopping spree with a style expert. All five winners get to join the fashion show this week where on the runway, Minka Kelly will join Diet Coke and in the Red Dress runway will don a custom made Diane von Furstenberg dress.

Supporters of The Heart Truth can also help raise for the cause by “donating a tweet.” For each person who re-tweets Diet Coke’s The Heart Truth post on February 8, Diet Coke will donate $1 to the FNIH, up to $100,000.

“For five years, Diet Coke has been a passionate supporter of The Heart Truth and its efforts to raise awareness about the importance of heart health,” said William White, Brand Director, Diet Coke North America. “While we’ve shared this vital message with millions of people through our partnership with the NHLBI, we’ll reach even more this year with creative online programs, in-store activations and eye-catching packaging.”

To see how else you can support the cause, check out The Heart Truth website to support raising awareness for heart disease!