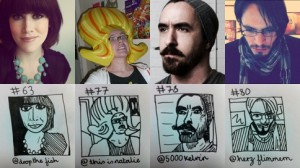 British artist Greg Burney has exploded on Twitter thanks to a very creative social media marketing strategy. Burney began with around 70 followers before he came up with his Twitter project called #drawmyfollowers. With the project, Greg Burney set out to do a sketch of every single new follower that followed him before November 14. He would then send the sketch to that follower. The message tweeted on October 31 read as such:

Not realizing the impact this was going to have on his Twitter profile, let alone his time, Burney had to ultimately had to tweak his promise. Within two days, he had 700 followers. Some media outlets picked up on it and the followers kept on coming. He then changed his November 14 deadline to promising to sketch his first 3,000 followers. If you’d like to get in on the action, it’s too late. I went to his page this morning and he now has over 5,000 followers. Brilliant!

By thinking outside of the box to use his craft and tie it into the social media platform he wanted to promote, it’s safe to say that it’s mission accomplished for this artist. We sure hope he enjoys sketching- he has his work cutout for him.