Did you know that leaving your phone charger plugged into the wall, regardless if your phone is plugged in or not, draws electricity? I didn’t. In fact, most mobile users are unaware of this. In the U.S., it’s enough to power 24,000 homes per year, or brew three to four million cups of coffee each day*.

Introducing AT&T’s Global First Automatic ZERO Draw Charger. Available only in AT&T stores in May 2010, the charger does not waste any power when left plugged in. Additionally, it improves charging efficiency when powering a device. It also features a “block and cable” design for maximum interchangeability, allowing customers to use the same charger for future handsets. Over time this will cut the number of chargers being produced, thus reducing future landfill waste.

How does it work? The Zero Charger works by automatically sensing when a mobile phone is not plugged up to the charger and cutting the power supply from the wall socket. Pretty nifty!

The cost of the unit will be the same as existing replacement chargers which is great news for customers and more reason to change to a greener solution. The charger will be sold in packaging with 100% recycled paper. AT&T recently announced a transition to smaller and more eco-friendly packaging for the wireless device accessories. The change means elimination of more than 60% of the paper and more than 30% of the plastic previously used for AT&T’s accessory products. 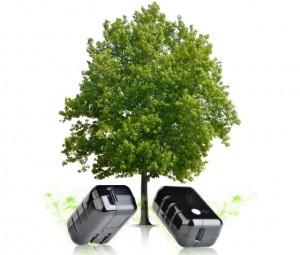