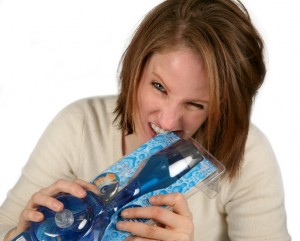 In 2008, Amazon launched its “Frustration Free Packaging” initiative which was born out of demand from consumers to have packaging that was easier to open. Nineteen items from Mattel and its Fisher Price brand, Microsoft Corp. and memory-card maker Transcend Information Inc. were used for the project. It has grown to 80,000 products this year, with more than 12 million items expected to ship under the program. Amazon wants to at least triple that number next year.

Teaming up with Wal-Mart, Amazon is pushing more manufacturers to change their packaging to cut waste and ease shoppers’ “wrap rage”. The nation’s largest online store and the world’s biggest retailer are asking large vendors like Procter & Gamble and headset maker Plantronics to do away with unnecessary and cumbersome packing materials. Such awkward packaging includes hard plastic packaging and wire ties used to secure toys to cardboard backings. Amazon is contacting manufacturers that get poor customer feedback about their packaging and sending engineers to help them improve their designs. By 2013, Wal-Mart plans to reduce packaging by 5 percent compared with 2008 levels, saving an estimated $3.4 billion annually.

While reduced packaging can boost consumers’ satisfaction, lower shipping costs and appeal to the environmentally conscious, companies are balancing those benefits with the need for packaging that still prevents theft and damage.

This year, manufacturers have been criticized for not using enough recycled or sustainable materials in their packaging. Greenpeace has targeted toy companies who were sourcing packaging materials from Indonesia that derived from the rain forests.