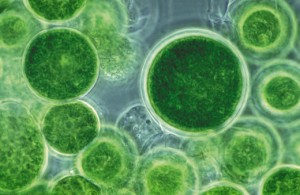 Cereplast, Inc. designs and manufactures proprietary starch-based, renewable plastics created from breakthrough technology. They have recently announced that by the end of the year, they will be making plastic from algae. The algae-based resins carry the potential of replacing 50% or more of petroleum content used in traditional plastic resins. Developing alternative feedstock unrelated to fossil fuels and to the food chains is the next ‘frontier’ for bioplastics and Cereplast is aggressively staying on the forefront.

Cereplast CEO says the algae is close enough to the starches that the company already turns into plastics such as corn, wheat, and tapioca. The problem is not the science, it’s the demand. Getting enough of the green stuff to produce mass quantities is the challenge that the Cereplast team is facing. Difficulties with growing and processing algae cheaply has kept it just out of reach for making it a pliable bio-plastic alternative. The process includes finding and cultivating a precise strain of algae from thousands, harvesting and drying, and then extracting the oils from the plant in a cost-effective manner.

What could this mean? In the not-so-distant future, the algae plastics could be and integral part of a trillion dollar plastics industry. Bill Francis, President of the Algalita Marine Research Foundation, which documents the effects of stray plastic on the world’s oceans, is optimistic on algae’s future in the plastics marketplace. “I do believe there will be a time when we look back and say, ‘Oh yeah, that was the plastic age”.

Algae-based plastics could be a huge breakthrough for the green packaging industry depending on how the product performs when used in different plastic manufacturing processes. Up to this point, there has been a lot of limitations with bioplastics.