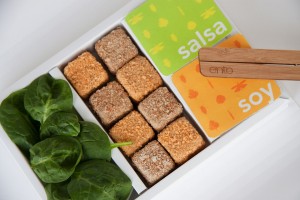 What would it take to get American consumers to eat grasshoppers, crickets, or mealworms? Most of these insects are thought to typically only be consumed on episodes of Fear Factor and not in every day life. Although we may view an insect as an insignificant source of nutrients, they are actually a great source of protein and are healthier and gentler on the environment than raised livestock.

In an attempt to convince the masses that eating hopping bug isn’t actually the grossest thing on earth, four students in the Innovation Design Engineering Masters program at the Royal College of Art and Imperial College London. Together they created Ento, a branding scheme and product that is “introducing edible insects to the western diet.” What’s their strategy you might ask? Tasty design.

The group realized right away that the look of the insects immediately turned people off to the idea of eating insects. “We discovered early on that cooked insects were surprisingly tasty, having a subtle, savoury flavour,” Ento cofounder Jonathan Fraser says“ However, we also found out that in their unprocessed form, most people were still grossed out by the idea of eating them. When we abstracted the insects though, people became a lot more open to the idea.”

When he says “abstracted” he really means “ground up the little buggers so they don’t evoke something you’d normally swat with a newspaper.” After hours spent in the kitchen and lots of taste test recipes later, the team settled on a handful of disguised creations which included dried cricket mince, honey caterpillar croquettes, and grasshopper pate. 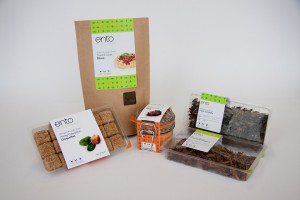 Now that they had created a food that looked somewhat tasty, they focused on the packaging. “We wanted insect foods to be presented in clean, crisp, and totally un-insecty way,” Fraser says. “Our goal was to make the brand fit three key characteristics: futuristic, natural, and friendly.” By looking at the packaging, it is fresh and doesn’t directly advertise that within the packaging is a bunch of crushed up bugs, but does still include the insect themed name and has a small green insect icon on the label.

“The food is tasty and appetizing, so none of the packaging hides it, nor does it take the easy road and make a gimmick of the ingredients,” Fraser says. “Our overriding message is the sustainability and nutritional benefits of edible insects, so the packaging was designed to convey this in an understandable and straightforward manner.”

So, do you think that just because the packaging and the product do not resemble that insects are present within the package that we would still be keen to invest in the product? Would this packaging make you curious to try eating some crickets or mealworms?